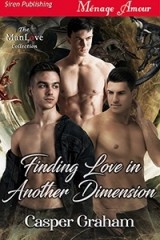 Genre: Erotic Romance, MMM | ePUB
I write because it’s a passion. I write because I have stories to share with the world. I write because I need a creative outlet. Sometimes, my head is filled with so many competing ideas and thoughts all at once that I simply have to put them all into words. I always have my smartphone with me, including shower time, because the muse hits me at unexpected moments and I don’t want to lose the ideas later. I’ve been dating a wonderfully supportive and loving man since January 2013, someone who is willing to accept my shortcomings, someone who is willing to tolerate my idiosyncrasies… The journey has been long and difficult, but we have our good moments. He has a love/hate relationship with the fact that I sometimes include a part of our stories in my books, but I enjoy writing “us” into the stories anyway. I hope that you will all join me in my writing journey and get a glimpse into my life through my stories.”
1. A Perfect Beginning: Brandon Miller is attracted to his superior, Jacob Connors, and the man’s boyfriend, Harold Collins, but he doesn’t want to insinuate himself into another couple’s relationship. Unexpectedly, the two men ask him out on a date and invite him into their lives. Jacob Connors is having problems with his boyfriend, but neither men is willing to end things between them. Instead of working things out in an ordinary manner, their relationship becomes more complicated when they decide to add Brandon Miller into the mix. Will Brandon be the missing puzzle piece that completes the relationship between Jacob and Harold? Or will the three men crash and burn together?